It is easy to see why HP wants to help guide your steps. The U.S. Athletic Footwear Industry Sales Grew 2 Percent to $19.6 Billion in 2017, NPD Group Reports. Add to that the North American foot orthotic insoles market is expected to grow to more than $1.7 billion by 2022, according to Statista. With a new 3D tech platform called FitStation, HP Inc. intends to get a big slice of these multi-billion dollar markets. 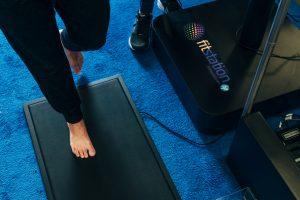 I received a demonstration of the FitStation technology at the RAPID 3D Printing trade show in 2016 and it is impressive. Since then, HP and the platform have been on a growth spurt in orthotics and in custom running shoes.

The technology looks like a small treadmill but instead of a moving rubber mat, you step onto a glass plate similar to a copy machine with short walls (filled with other sensors) to measure your gait and step. In my demo there also was a pressure sensitive mat that you also walked on that measured various pressure points based on how your foot sunk into the mat allowing a very precise 3D model of your foot. The specifications I pulled from their website state: “Gait pattern capture. FDA-approved with 8,192 sensors capturing 500 data points per second.”  I don’t know that I have seen a more sensor-packed piece of equipment.

A range of companies are using the FitStation as well as the HP MJF printer:

Brooks Running Company started working with HP in 2017 as one of the first to create custom running shoes and they use FitStation for the insole and to determine other features of their shoes. In May 2018, they announced the Brooks Genesys—the company’s first personalized running shoe— would be available for runners in the U.S. in early 2019.

HP also has a partnership with Superfeet  using the HP Jet Fusion printer to create their custom $150 insoles. The small Washington State-based company is growing fast with its energetic and fun branding as well as fast production methods.

In fact, Superfeet created its own manufacturing plant, Flowbuilt, to keep on top of custom insole and custom shoe market opportunities. Right now, the FitStation setup—which is in 26 running stores across the country—can use that rendering to recommend existing shoes for you, as well as 3D-print custom $150 Superfeet insoles. In the future, once you’ve had your feet scanned, you’ll be able to load your data into the program and get your own version of the Brooks Genesys. FitStation takes your foot shape, gait, and stance into account to shape the insole and determine the midsole’s stiffness.

In the effort to better mold and form a shoe or an orthotic to your foot, HP is seeking to improve your everyday walking experience and your performance running goals. For those who have long wanted either less pain from their feet or a greater ability to run faster and more efficiently, HP is here to help.

UPDATE: In Shanghai, China, last week, SIGG Outdoors (“SIGG”) formally announced a partnership with HP. Based on the FitStation platform, the two companies will jointly research and develop the most personalized and technologically advanced professional digital and dynamically-customized running shoes worldwide. According to the plan, SIGG, the exclusive partner of HP FitStation in China, will debut this innovative product at the ISPO, which will be held in China in January 2019, and roll out the product to Chinese consumers in March 2019.

Keep up with my 3D Printing work in Education at GoExplore3D (3DRV continued) Or tag me on Twitter or @TJ_McCue on Instagram.

I write about new technology, often hardware, gear, and 3D tech, but sometimes mobile and the cloud. I like to help small and midsize business owners and execs figure out how to use these tools to grow their businesses.

In the past, I have put pen to paper for the Wall …