The Rebirth of Additive Manufacturing in 2019

As of the end of 2018, it has now been seven years since SmarTech Publishing believes the additive manufacturing (AM) industry reached its most significant inflection point when the mass influx of low-cost desktop machines catalyzed public attention in the technology like never before. Shortly thereafter, in 2013 and 2014, the two largest publicly traded companies in the industry achieved growth levels in both revenues and stock value which further bolstered the world’s interest in AM. During this seven-year span, however, the industry has been challenged like no other period in its history. With collective expectations raised, a similar elevation of the challenges in meeting new found demand has no doubt been a factor in the industry growth over the last few years.

One of the most interesting dynamics during this period has been the ways in which industry activity and attention have made rapid shifts in an effort to capitalize on the significant (but potentially fleeting) surge in interest in AM. After all, a failure to meet the demands of customers ultimately results in a lack of customers to do business with, and as expectations and goals leapfrogged capabilities and reality over the last seven years, a number of sizable or innovative companies have made significant moves in order to build new business foundations that seek to establish a hold in an industry going through a rapid and tumultuous rebirth.

Metal additive manufacturing, while historically much more niche in overall adoption and use than that of polymer 3D printing, seemed to quickly bypass the polymer segment in terms of delivering on the promise of a manufacturing revolution over the last seven years. This has resulted in major structural shifts in the industry which continue to play out in current days. Major industry trade shows have steadily grown to impressive events by any measure, but with more and more emphasis positioned on the latest in metal additive manufacturing technology and solutions. Companies like Desktop Metal, Markforged, Digital Alloys, and other start-ups have far outpaced fundraising based on their metal AM solutions than those in the polymer space since 2016. Leading players previously only positioned in polymer 3D printing have announced major strategic shifts to introduce metals solutions for 2019 and beyond, including Stratasys and HP. 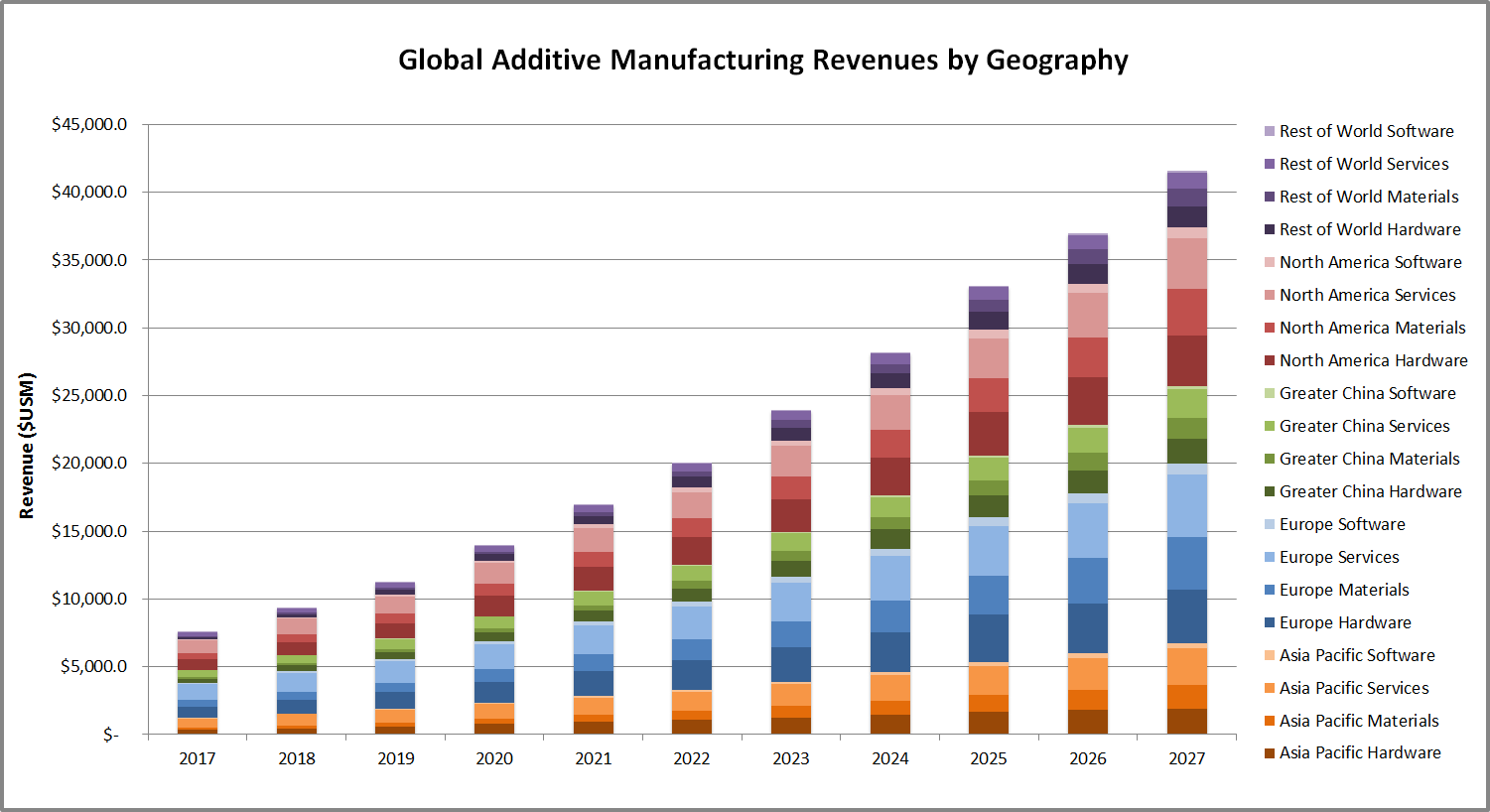 Indeed, over the last seven years, additive manufacturing has been in a state of hectic, uneasy growth. Out of balance, and uncertain, the AM industry could be likened to a race car driver who, in the pursuit of speed and ultimate victory, temporarily loses control of his vehicle for a period of precarious instability—still moving forward, but without the balance and control that guarantees the driver finishes the race at all. In 2018 things appear to be changing yet again. A restoring of balance appears to be forming, with major players beginning to overcome growth challenges little by little towards sustainable progress. This can be credited in part to two developments. First, the influx of multinational entities with considerable resources have joined in the industry in more direct, meaningful, and ultimately supportive ways to help stabilize the path towards meaningful, controlled progress. Global chemical manufacturers the likes of BASF, Evonik, Covestro, Solvay, and many more have begun to take ownership of moving technologies (especially plastics and polymer solutions) more seriously towards becoming tools for manufacturing. Meanwhile, large manufacturing tool and technology companies like Trumpf, DMG Mori, HP, GE, and many more have lent considerable development and supply chain resources to the industry to improve the level of access, consistency, quality, and other aspects required for a maturing technology to succeed.

Second, a massive industry refocus on application-driven solutions has helped focus development efforts and shed negative perceptions of legacy rapid prototyping technologies when targeting more serious manufacturing-oriented engagements. All leading technology companies are now dedicating resources to building machines and solutions with a specific, high value end user in mind, rather than generalized or half hazard strategies in the attempt to make their machines the single go-to solution for every customer type. While the ultimate end goal of the industry may indeed be to take opportunities currently captured by other manufacturing technologies and processes (like CNC machining or injection molding) and convert them to additive ones, the growth driver of the current industry is creating solutions for existing manufacturing problems where other tools and processes struggle to deliver, and creating growth that is complementary—not competitive—to existing manufacturing processes.

Looking ahead to 2019, SmarTech Publishing believes the AM industry will be reborn. Not only does overall industry growth appear to be gaining its pace again with historical levels, but it appears the entirety of the industry stands to make sizeable gains in unison, and as a collective rather than in a contrasted group of winners and losers. This is the essence of a true rebirth—becoming whole again, and with a focus on collective and consistent progress.